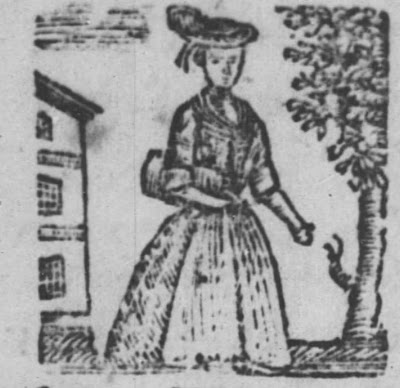 Runaway advertisements have become a staple for people researching 18th century material culture.  The digital age has helped us researchers learn more about those who were considered property whether as enslaved persons of color, indentured servants or convict servants and the clothing they were wearing. 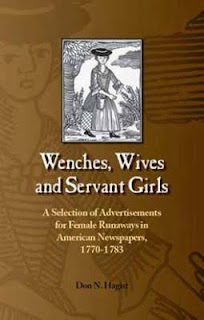 The first book to really spark my interest was "Wenches, Wives and Servant Girls" by Don N. Haigst.  It is a great resource for material culture.  However, there is only 1 runaway advertisement for North Carolina mentioned.

Unfortunately, the newspapers are limited in North Carolina.  Granted we have some printed as early as 1751 but the editions are sparse.  Lots of missing years and it makes it hard when doing research.  You tend to get jealous at the newspapers like up in PA, MD and VA where there are TONS of references to runaways.  I only have THREE runaway ads from 1757-1775  for North Carolina, 2 in NC newspapers and 1 from a VA newspaper.  However, those three give us a glimpse of what the women were wearing and the fashions of the day.

"Ran away from the Subscriber in Newbern, an Irish Servant Woman named MARY LAMBERT, a short, lusty, full faced Woman, very fresh complexion, wears her hair down behind, which is very black, and curls handsomely, had a Blemish in one of her Eyes.  Had on a check'd Woolen petticoat, Callicoe gown, red stockings, and a pair of old Calimancoe shoes.  She took with her a dark color'd Callicoe gown, white Sattin hat, with red ribbon, a plain Lawn apron and other good Cloths.  Whoever brings the said servant to me in Newbern, shall have Forty Shillings Reward.        James Davis"


The first thing that struck my attention was her check'd woolen petticoat.  We don't see that very often in runaway ads or listed in inventories.  I am sure it was a nice warm alternative to a quilted petticoat.

Then the listing of 2 types of callico.  I wonder if her Callicoe gown that she ranway in was a white callico while she took with her a "dark color'd" callicoe gown.

And then the white sattin hat with red ribbon.  I wonder if the hat looked like the one is this image:


Then we move forward to 1773 in Wilmington, North Carolina
"Three Pounds Rewand [sic]
Indented Servant Girl named MARY KELLY  lately from Ireland, but says she has lived 14 years in London; is about 18 or 20 years of age, five feet six or eight inches high, stoops in her walking, fair complexion and redish hair; had on when she went away a little round man's hat, green petticoat and black stuff shoes; took with her, two striped blew [sic] and white cotton, and one calico red flowers, short gowns, and 6 yards of dark colored calico not made up.  Whoever takes up the said run-away servant, and secures her in any of his Majesty's Gaols so that she may be had again, shall be intitled [sic] to the above reward, and if brought home all reasonable charges paid by me.

Her green petticoat is interesting - wonder what color green it was?   Goose turd green, pea green but nonetheless it is green and striking enough to be noticed.

1770s is when we see short gowns make an appearance in North Carolina.  The estate of Ann Carter of Onslow County contained 4 short gowns.  Other inventories in the 1770s and early 1780s also list short gowns.

Janet Schaw describes them as a hot weather garment, "The heat daily increases, as do the Musquetoes, the bugs and the ticks. The curtains of our beds are now supplied by Musquetoes' nets. Fanny has got a neat or rather elegant dressing room, the settees of which are canopied over with green gauze, and on these we lie panting for breath and air, dressed in a single muslin petticoat and short gown.” (Journal of Janet Schaw, 1774-1776; in this entry, she is in Point Pleasant, North Carolina) 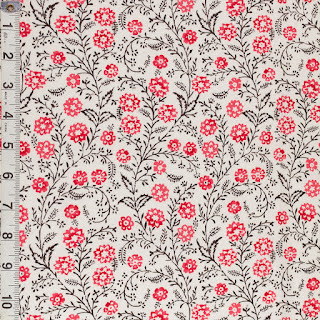 Then we have our final runaway ad.   She is a North Carolina runaway enslaved woman but it is posted in a Virginia newspaper.  It makes sense since Edenton is close to the tidewater region of Virginia.

"Run away from Edenton, in North Carolina, on the 27th of April last, a negro named ROAD, about 28 years of age.  She was born in New England, and speaks in that dialect has remarkable thick lips, wears her hair combed over a large roll, and affects gaiety in dress.  She had on, and took with her, a homespun striped jacket, a red quilted petticoat, a black silk hat, a pair of leather shoes, with wooden heals [sic], a chintz gown, and a black cloak.  She is supposed to have forged a pass, and may endeavor to pass as a free woman, and change her clothes and name.  Whoever will take up the said wench, and return her to the subscriber, or to Joseph Blunt, esquire of Edenton, or to Keder Merchant, esquire, of Currituck, or secure her in any of the majesty's gaols, and notify the owner,shall receive FORTY SHILLINGS reward and reasonable charges by  JOSIAH HALL"

Coming from Edenton, I wonder if she witnessed the 1774 Edenton Tea Party since Penelope Barker's maiden name is Blunt.   Also there were many residents of Edenton who settled there from New England, so one can speculate that she was brought down as a teenager since she speaks in "that dialect."  An upper class family no doubt owned her based off her wardrobe.  She wears a homespun striped jacket and red quilted petticoat and a black silk hat.  She wears her hair in the latest style with the front roll and she took a chintz gown and a black cloak.  The cloak I wonder was it a capuchin or cardinal?

If you are wondering if one is worth more than the other in reward money well,  yes and no.   Mary Lambert and Road were worth the same amount.  40 shillings = 2 pounds.  While Mary Kelly was worth 3 pounds.  Maybe because she was younger?  Who knows.  And if you are wondering about the conversion for currency well....

These three women escaped their owners and I hope to live better lives.  By running away, and their owners posting in the newspapers descriptions of them and their clothing - they provide us a glimpse into their lives of those who lived in North Carolina during the 18th century.
Posted by Brsawyer1774 at 10:14 PM 4 comments:

The content on this blog and opinions are my own and may not represent the policies of the North Carolina Department of Natural and Cultural Resources. 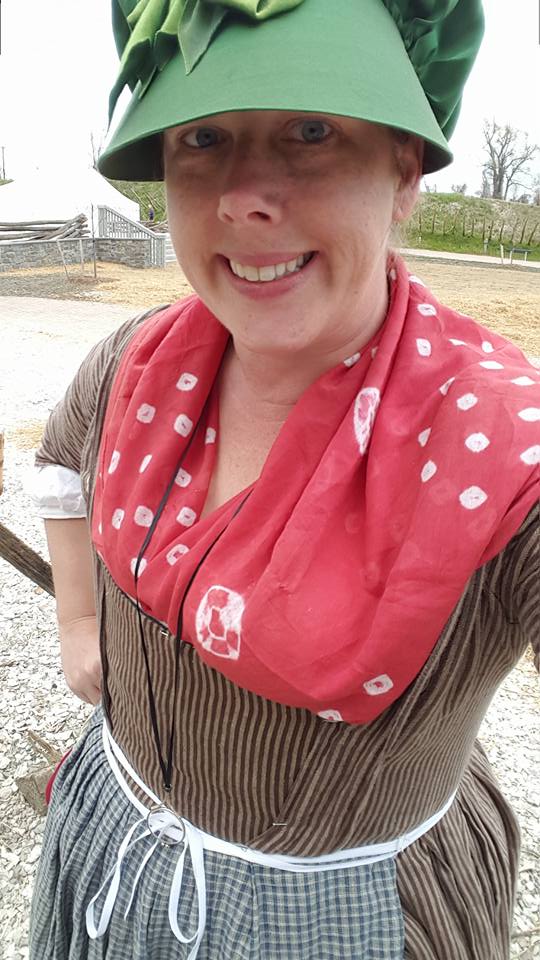 Brsawyer1774
A researcher who is always looking for new information to help us understand our past. A transplanted Midwestern living in SE North Carolina. Have been involved with historical re-enacting since 1987. Obtained my BS in Historic Preservation in 1996 from Southeast Missouri State University and my MA in Public History from the University of NC at Wilmington in 2001. Currently serve as the collections manager/researcher and exhibits coordinator at Fort Fisher State Historic Site in Kure Beach, NC.